This week I have been in Tasmania, Australia (without the camera). Being there made me think about how important it is to me to photograph the icons in each place I spend a significant amount of time. In addition to my wedding photography, I’m a keen wildlife photographer, so that means I try to capture the icons of the local wildlife.

Close up of a Tasmanian Devil

If you are not familiar with Tasmania, it is an island state of Australia located south of the mainland. It is important to me to clarify that, because I recently posted a picture of a Tasmanian Devil on Google+ and indicated the picture was taken in Australia. 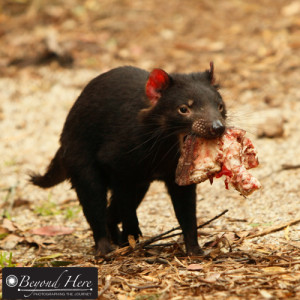 The Tasmanian Devil is a carnivore

Tasmania is known for a number of things including – spectacular scenery, friendly people, fresh air, great sunrises and sunsets, fantastic farming conditions and primary produce, excellent fishing, windy weather, and for the animal which bears its name – the Tasmanian Devil.

Tasmanian Devils are not easy to photograph as they are hard to find and don’t often keep still. I have been slowly building my range of Tasmanian Devil images over the last 5 years. Some quick facts about Tasmanian Devils. They are: 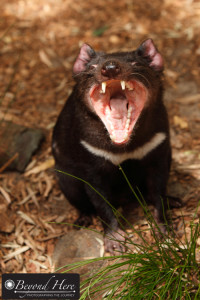 Tasmanian Devils are known for the power of their jaws

One fact I didn’t know until today, is that very few Tasmanian Devils exist outside Australia because the population which has been exported have not been successful in breeding. Interesting. Perhaps that’s why pictures of them seem to get an extraordinary number of comments on social media? Or maybe people feel a connection to them through the Looney Tunes character “Taz”?

Visiting Tasmania is always enjoyable, even if it is a little cold at this time of year. It was also a timely reminder to me to take time to capture the icons photographically.

Do you have a favorite icon to photograph? Buildings, architecture, people, wildlife? Have you had the chance to photograph a Tassie Devil??