Over the last 2 months I have been working with 5 other photographers to build a new image library. I didn’t know the photographers before we started the project, and it has been fun and challenging to work with them. One area that has become clear is that there is room for improvement in shooting moving objects. I have ‘grown up’ shooting sports and wildlife and selling prints. In that environment the images have to be in sharp focus. The 5 photographers are all younger than me and have ‘grown up’ in the era of Facebook and Instagram where there is less importance on fundamentals like having the image in really sharp focus. So here are a few pointers for shooting moving objects.

Below is a straightforward lifestyle image of a woman walking across the road. This image can be very boring if she is standing still. Having her moving adds an energy to the image. So how do we maximize the chance of having her in sharp focus? Firstly we shoot in continuous focusing mode. I use Canon equipment, so on my Canon camera bodies that is AI Servo mode. 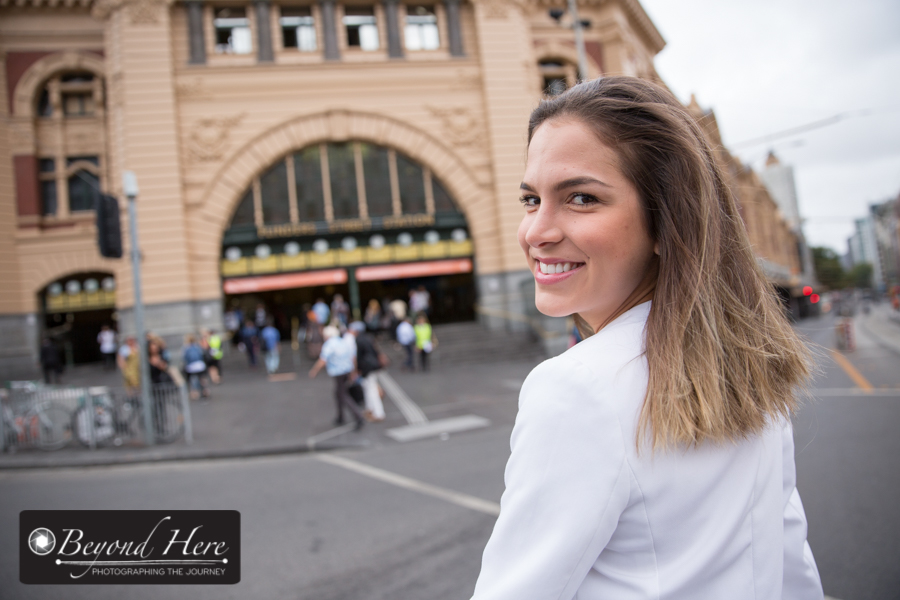 Choose a single focus point to tell your camera where the focus should be. In this case I pre-selected this point before we walked across the road, and I aimed it at the model’s eye closest to the camera.

For the shot above I wanted to blur the people in the background so I shot at f2.8. It was an overcast but bright morning, so I used ISO400. I knew at this ISO and f2.8 it would mean I could keep a fast shutter speed which again helps keep sharp focus in the image. The shutter speed in this image was 1/1600s.

In older DSLR bodies I would be very careful about raising the ISO as it would result in grain in the image. But with modern DSLR’s this is not a concern, and is not a consideration at ISO400.

What Shutter Speeds Should You Work With?

The answer to this question is to practice extensively. I know from taking thousands of images of moving objects what shutter speeds maximize the chance of a sharply focused image.

Of course the speed the object is moving has an impact on what shutter speed you will need. Again, from experience, I know that in the case of the image above any shutter speed at 1/400s or faster will give me a good chance of a sharply focused image. 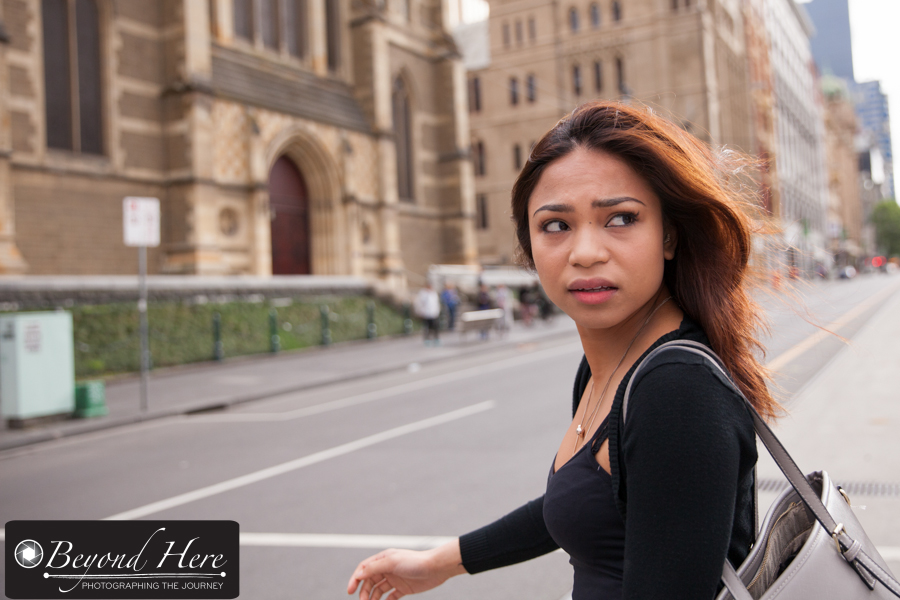 In the case of kids sport – I have shot many basketball games and know that 1/800s might not give me sharply focused images when the kids are running at full speed. At 1/1000s or faster I have a much better chance.

And for fast moving wildlife like the grey headed flying fox below, I’ll be aiming to shoot at 1/1600s or faster.

Like everything in photography (!) the answer is up to you. I like to shoot multiple images to give me choice among the images and as ‘insurance’ if one shot is out of focus. I shoot images of fast moving objects in burst mode and shoot 3 or 4 images each time. 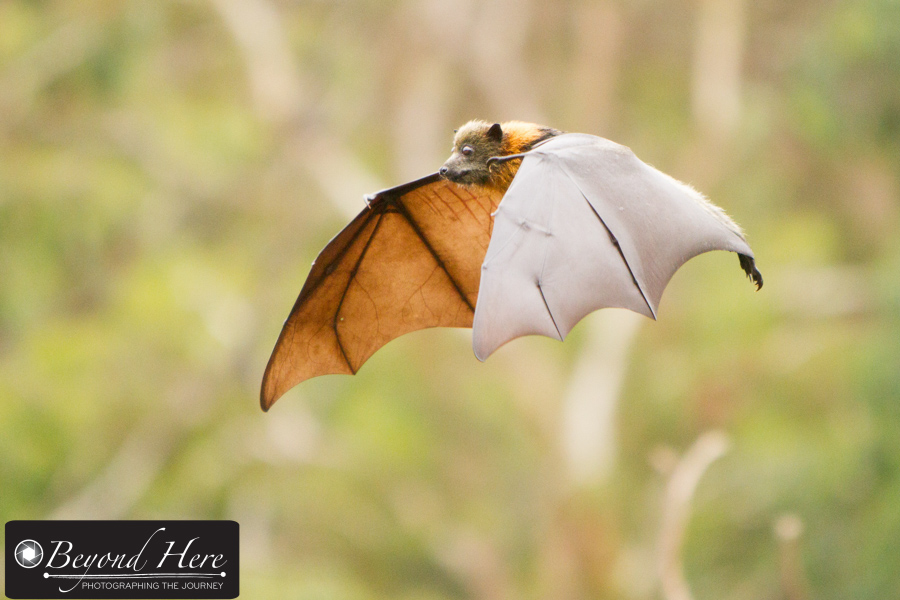 This image was shot at 1/2000s to freeze the action of this fast moving flying fox. It was shot in burst mode.

If you are serious about your photography and committed to producing sharply focused images you’ll need to master shooting moving objects. Think for a moment about the possible scenarios – sports, live music, lifestyle portraits, stock, wildlife, wedding, events. The list goes on. If you can’t shoot moving objects well you are going to significantly reduce the options for earning money from your photography work.

I hope these quick pointers will help you with shooting moving objects. Next step – lots of practice! Happy shooting.

Happy 2018 to all Beyond Here readers! I hope you’ve had an enjoyable time over Christmas and New Year and are ready for the photography year ahead. Let’s start 2018 with a sneak preview of a new stock photography site.

What’s this all about?

Regular readers of Beyond Here will know I am a big fan of the stock photography model. A well planned and executed shoot can generate the photographer an income for many years into the future (read Why I Shoot Stock to catch up on some of this thinking). But stock photography has changed. I was an exclusive contributor with iStockphoto for nearly 8 years before deciding that the exclusive model was not working for me (see Why I Dropped iStock Exclusivity). I was investing more into each shoot, and seeing lower royalties per download. That’s not a recipe for success unless your download numbers are growing very strongly. 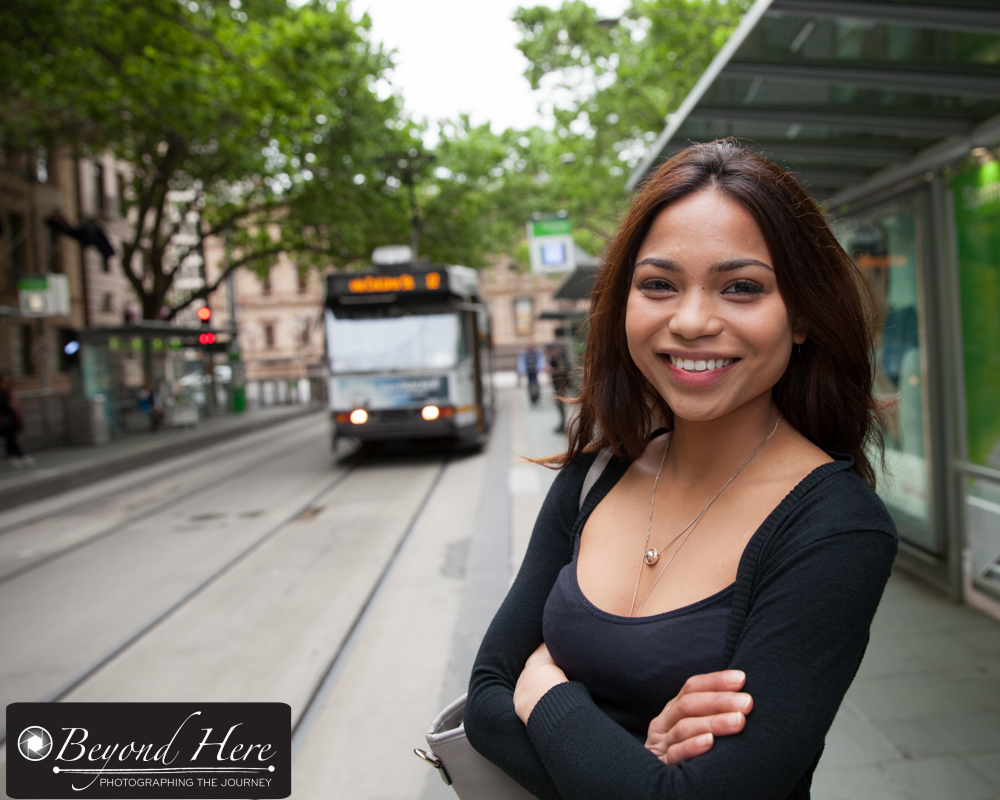 So Where to From Here?

As part of my decision to drop iStock exclusivity I considered where iStock seemed to be heading. Quality standards have dropped. Large numbers of files are coming in. High quality images are getting lost among thousands of low quality images.

That strikes me as providing a great opportunity for an image library that goes in the opposite direction, swims against the tide of low quality images, and instead maintains high quality standards. (It makes me think of the success that Stocksy is having with a high quality model.)

What does the current state mean for microstock photography customers?

Microstock customers are spending a long time searching through thousands of images to find the ones they need. They are swamped with low quality images. Image buyers are spending more time looking for what seems like the needle in the haystack. They can’t be sure the image is of good quality or even in focus.

So what about the new stock photography site?

The points above have prompted me to build an image library.

We’ve been working on it for the last quarter and will launch in the next few weeks. You can find it at Melbourne Stock Photos. It is a niche site specializing in lifestyle images of Melbourne, Australia. We are aiming for it to be the high quality source of Melbourne lifestyle images. It will save customers time searching through thousands of images at microstock sites.

Customers will be able to request specific content. In a radical, old fashioned way, they can email or call with content requests. They can have a relationship with Melbourne Stock Photos and not just a transaction. We’re going to partner with our customers to provide the content they need, and save them hours hunting around on microstock sites.

Our launch content has a small number of images. We have a small team of photographers shooting new material and will build our content month by month. Melbourne Stock Photos will never compete on scale or breadth with the large stock photo sites, but it will provide a specialist site with high quality content.

Melbourne is a fabulous city and it should have a fabulous image library to help promote it to the world. Melbourne Stock Photos is aiming to be that library.

Thanks to Nicola, Tim, Teri, Julie, CK, and Greg for the skills and experience they’ve brought to this adventure already. Special thanks to Alison for leading the IT work – she’s been critical to getting us this far!

We will be launching the site in the next few weeks. I wanted to give Beyond Here readers a sneak preview of the new stock photography site. Go ahead and check out Melbourne Stock Photos. I’d welcome any comments, feedback, or suggestions. Here’s to a great 2018!