Last month we photographed the Southern Peninsula Junior Basketball Tournament. It is an annual tournament held in November just before the start of the rep basketball season. This year the tournament featured 440 teams and was held at 14 stadiums and 34 courts around the Mornington Peninsula, Victoria. Those numbers speak for themselves – it is a very popular tournament with over 4000 players participating.

What were we photographing?

This year we photographed the under 12 division. We were shooting action portraits as the players competed. (Ironically the photo below is from the one under 14 game we photographed!) 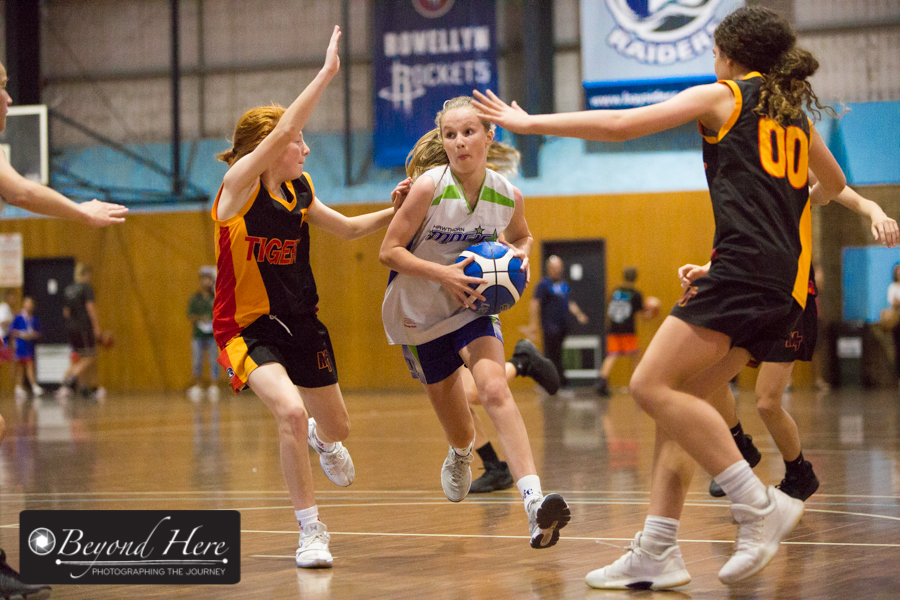 Low light and fast action was a challenge

My understanding is that this is the first time the tournament has partnered with a professional photography business. The under 12’s featured 107 teams and over 1000 players. It was quite a challenge photographing 1000 junior basketball players.

How did we manage that?

We had 6 photographers across multiple venues on the Saturday and Sunday of the tournament. We aimed to shoot each team at least once, and photographed 70 games over the 2 days. That resulted in close to 10,000 action portraits featuring everything from young players new to representative basketball, through to some of the best under 12 players in the state.

Behind that was a lot of planning and scheduling about which photographers needs to be at what location shooting which game. I won’t sugar coat this – the planning was a very significant logistical challenge.

How was the lighting in the stadiums?

Tournament play was on 34 courts in 14 different stadiums. Some stadiums are new and well lit while, on the other hand, others are 30+ years old with no natural light.

We were aiming to shoot at 1/1000s to freeze the action. To achieve that we were shooting at high ISO – up to ISO8000 in one very dark stadium. It is amazing that today’s modern cameras can shoot fast moving action in this environment.

It was fun to see the kids in action, and a thrill to see them excited about the photos. Prints and digital downloads are available to order through password protected online galleries. The galleries are open for another 2 weeks and already it is a nice surprise to see how how popular prints are. I’ll save more of that for another Beyond Here post. Hooray for prints!

It was great to work with a strong team of photographers and reassures me that we can tackle bigger sporting events in the new year.